Welcome to a world where each single letter has a mission to accomplish… where words are currying precious information and messages, as a valuable gift from our ancestors to all of us, and from us to all of our offspring…

Greek words are currying plenty of such information and messages… Thousands of them, bring us closer to nature, the mother of all,  help us to form a moral frame whithin which we can all leave better, or provide scientific information even to state of the art researchers on their way to deep learning.

The bibliography below, indroduces you to this world!

The study is dedicated to all lexicographers throughout the centuries who explore words and meanings.  Especially, to all those women, who searched, saved and promoted this knowlegde, including, Anna Notara, Jacqeline de Romilly, Marianne McDonald and Anna Tziropoulou Eustathiou.

In a great extent, the study is based on The Thesaurus Linguae Graecae® (TLG®), a research program at the University of California, Irvine. Founded in 1972 the TLG has collected and digitized most literary texts written in Greek from Homer to the fall of Byzantium in AD 1453.

Etymologicum Magnum proved to be a great source of information, for almost every single word. (Greek: Ἐτυμολογικὸν Μέγα, Ἐtymologikὸn Mέga) (standard abbreviation EM, or Etym. M. in older literature) is the traditional title of a Greek lexical encyclopedia compiled at Constantinople by an unknown lexicographer around 1150 AD. It is the largest Byzantine lexicon and draws on many earlier grammatical, lexical and rhetorical works. Its main sources were two previous etymologica, the so-called Etymologicum Genuinum and the Etymologicum Gudianum. Other sources include Stephanus of Byzantium, the Epitome of Diogenianus, the so-called Lexicon Αἱμωδεῖν (Haimōdeῖn), Eulogius’ Ἀπορίαι καὶ λύσεις (Ἀporίai kaὶ lύseis), George Choeroboscus’ Epimerismi ad Psalmos, the Etymologicon of Orion of Thebes, and collections of scholia.[1] The compiler of the Etymologicum Magnum was not a mere copyist; rather he amalgamated, reorganised, augmented and freely modified his source material to create a new and individual work. (Source: wikipedia.org) 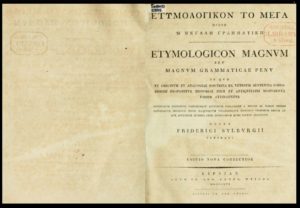 The editio princeps of the Etymologicum Magnum was published by Zacharias Kallierges and Nikolaos Vlastos under the patronage of Anna Notaras at Venice in 1499.

“ΕΛΛΗΝ ΛΟΓΟΣ” by Anna Tziropoulou Eustathiou, highlighited the evolution from the Greek origine to thousands of contemporary used words in Italian, Frence, Spanish, English German, and almost all Modern Languages throughout the world. This book is a great journey itself. It inspired all of us in a great extent by highliting knowledge and introducing new techniques in the research method. 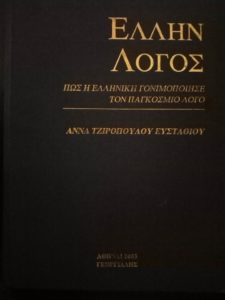 Additionally, bibliography, includes the most well known Etymological Dictionaries such as the Oxford English Dictionary and Webster’s New World Dictionary .

A Greek–English Lexicon, often referred to as Liddell & Scott (/ˈlɪdəl/),[1] Liddell–Scott–Jones, or LSJ, is a standard lexicographical work of the Ancient Greek language.

Any cookies that may not be particularly necessary for the website to function and is used specifically to collect user personal data via analytics, ads, other embedded contents are termed as non-necessary cookies. It is mandatory to procure user consent prior to running these cookies on your website.